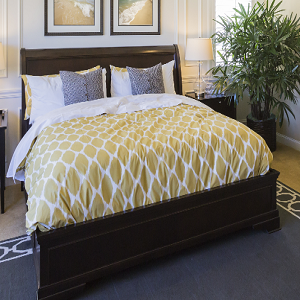 In 1893 Brigham Young named the city of Sandy, Utah, for the area's bone-dry soil, and purchased land between Fourth East and State Streets. Farmers eventually turned to silver mining, shaping Sandy into a boom town. Today, this suburb of Salt Lake City is the fourth-largest city in the state, with a population of around 90,000.

Nestled at the base of the Wasatch Mountain Range, 13 miles south of Salt Lake City, Sandy is often referred to as both a bedroom community and "the ultimate base camp." Residents enjoy convenient access to outdoor adventure in the mountains and Salt Lake Valley, plus the perks of city life along the Wasatch Front—the stretch of urbanization from Brigham City to Payson, Ogden and Provo. The Oquirrh Mountains lie an hour's drive east.

Top skiers consider Utah to have the finest snow powder in the world, and Sandy is close to the state's prime skiing. Snowbird Ski & Summer Resort and Alta Ski Area are approximately a 30-minute drive east toward the Wasatch Mountains.

On the eastern side of the 22-square-mile city lie the residential communities, built along the slopes of the Wasatches. While visiting Sandy, shoppers peruse the stores and restaurants in the commercial west end. Jordan Commons shopping and entertainment center houses a Megaplex Theater. A fun thing to do in Sandy besides shopping is ride the carousel at South Towne Center Mall.

Another top thing to do in Sandy is catch a game or a concert at Rio Tinto Stadium, west of Jordan Commons. Real Salt Lake MLS soccer team calls the stadium home, and past performers on its stage include Paul McCartney and KISS. Rio Tinto also has hosted the USA Rugby Championship.

While visiting Sandy, history buffs head to Sandy Museum, located on the city's west side, around the corner from Main Street. The two-level, historic brick building once served as a co-op where local farmers, miners and Native Americans exchanged goods. Exhibits cover Sandy's history as a mining and smelting town, and include items like Kit Carson's glasses and a U.S. flag that was flown the day Utah became a state. The museum is located across the street from the original site of the Sandy railroad station. Admission is free.

With sweeping sunset views of the Wasatch Mountains to the east, Sandy Amphitheater hosts concerts on the north side of the city, seating 2,750 guests. Beneath the moonlight and stars, patrons sway to live music, unwind on a blanket on the lawn or enjoy a prime front-row seat. Olivia Newton John is among those who have graced the stage here.

Listing information provided courtesy of the Wasatch Front Regional MLS. IDX information is provided exclusively for consumers' personal, non-commercial use, and it may not be used for any purpose other than to identify prospective properties consumers may be interested in purchasing. The data is deemed reliable, but is not guaranteed accurate by the MLS.

We're always available to help out, get in touch with us any time, or shoot us an email.

Please provide your name and email